Gorilla is an experiment design tool, not just a task building or questionnaire tool. This is one of the biggest differences between it and other tools available for hosting online experiments. The Experiment Building tools allow you to creatively reconfigure task and questionnaires into a wide number of different experiment designs without having to code.

The interface is built around dragging and dropping nodes and connecting them together with arrow lines. This modular approach makes it much easier for labs to reuse elements that have been created before by themselves or by others.

This is the simplest structure in the Experiment Builder, the start and finish ‘nodes’, indicate where the participant enters the experiment, and when they end. The green nodes are two sequential questionnaires (for gaining consent and demographics), and the blue node represents a task built in the Task Editor or Code Editor. The (vX) in the brackets of the task node indicates the version of the task, as the builder implements a version control system allowing you to roll-back your task to any previous saved version. 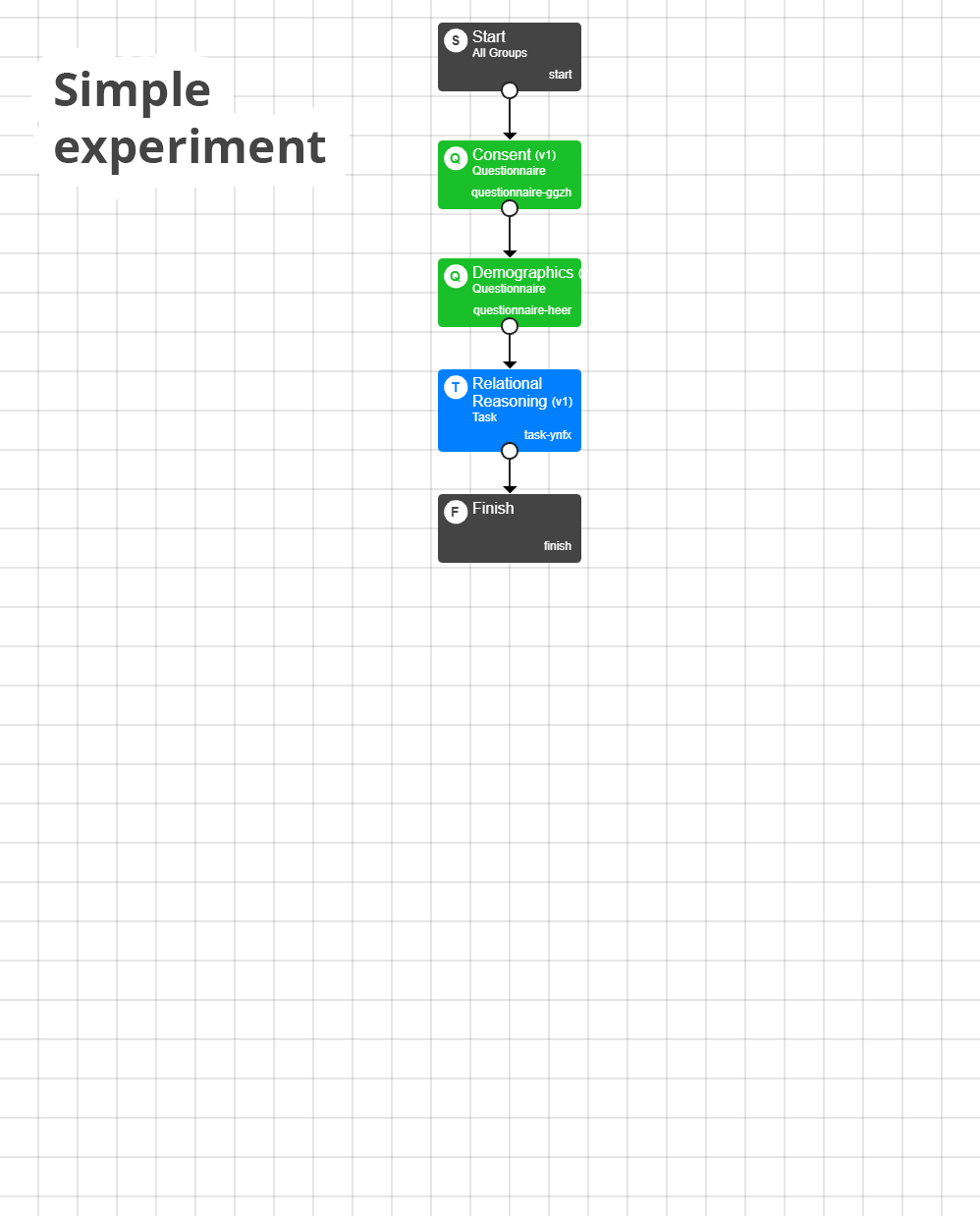 Expanding on the simple experiment structure above, this represents a typical within-subject design. After consent and demographic questionnaires, the tasks containing the two dependent variables are split up into two task nodes – ‘Relational Reasoning’ and ‘Affect Test’. 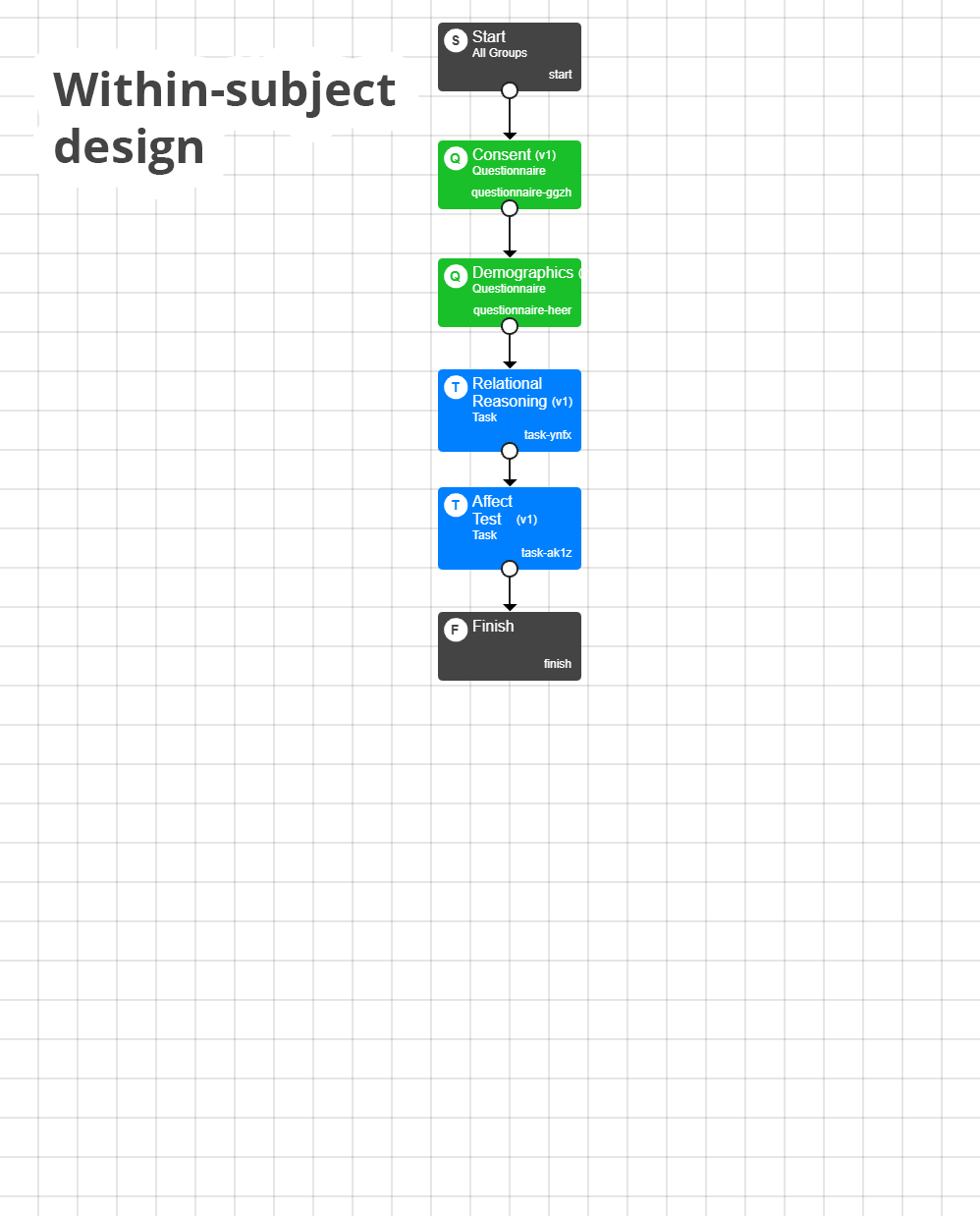 This is a slightly more complex version of a within-subject design, it makes use of the order node, which allows the experimenter to control for the order of the tasks between participants. The order node allows for a standard ‘Latin Square’ design – where all orders in a square are shown equally , or a ‘Balanced’ design – where all possible permutations are shown (note: there is only a difference between these choices with four or more tasks). 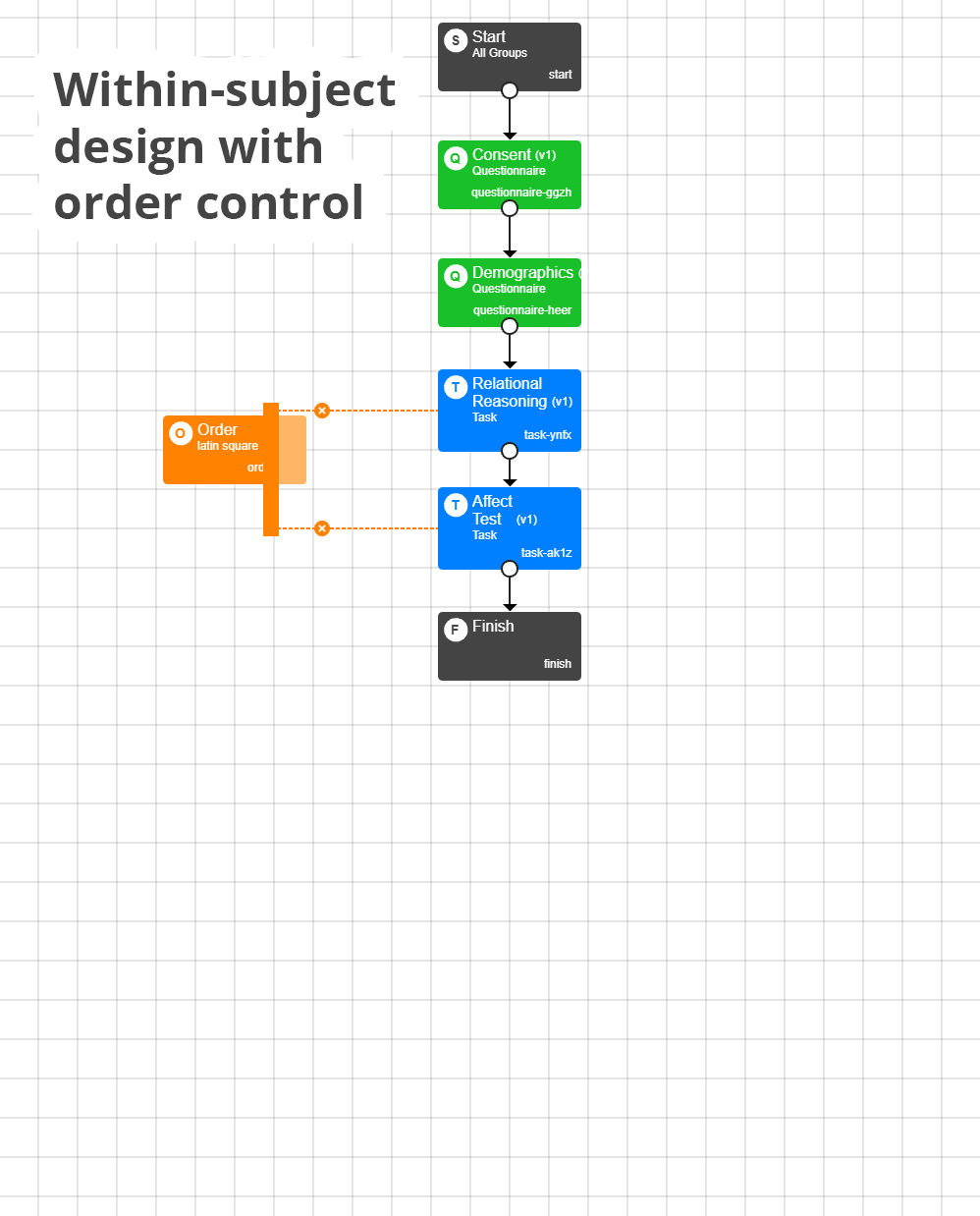 Between subject design with randomizer

Between subject designs are also made possible in the Experiment Builder, utilizing the ‘Randomiser’ node. This node will assign each participant to one of n number of branches (in this case two, named control and treatment), whilst enabling the user to set the likelihood/weighting of each branch via a ratio field (in this case there is a 10:10 ratio, so for every 20 participants 10 will end up in each branch). The node also has a choice of randomization mode, which can be ‘Balanced’ so that each node will get a fixed proportion of participants (i.e. random without replacement), or ‘Random’ where the ratio acts a probability and equal proportions are not guaranteed (i.e. random with replacement). 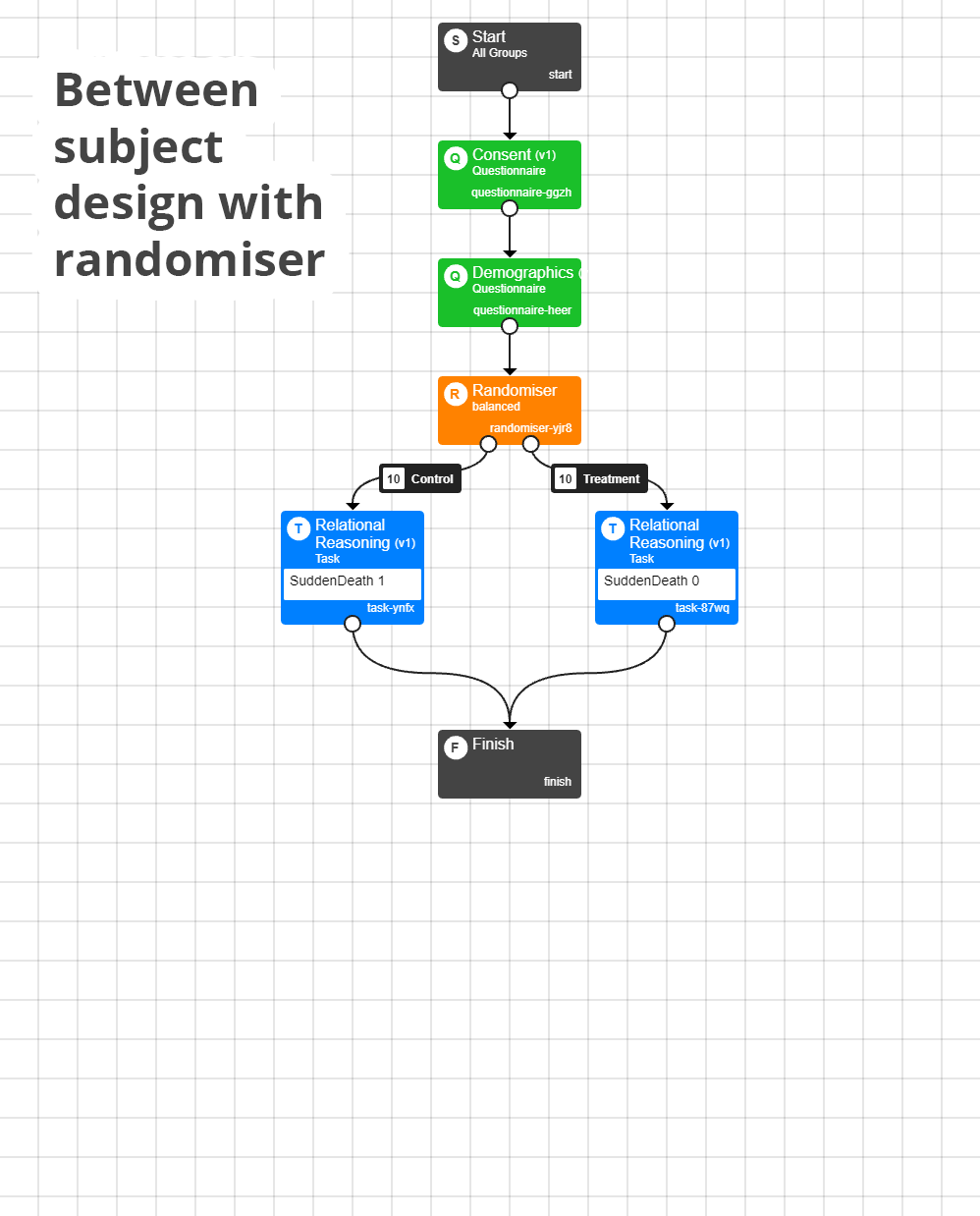 This example illustrates an intervention design with a pre- and post- test. The design is similar to the between subject design above, which pseudo-randomizes allocation to control and treatment conditions between participants. The same test is given before and after completing the assigned task, to ensure this test is not the same, two stimulus sets are assigned (‘Stimulus Set A’ & ‘Stimulus Set B’), and these are balanced between participants using the order node. 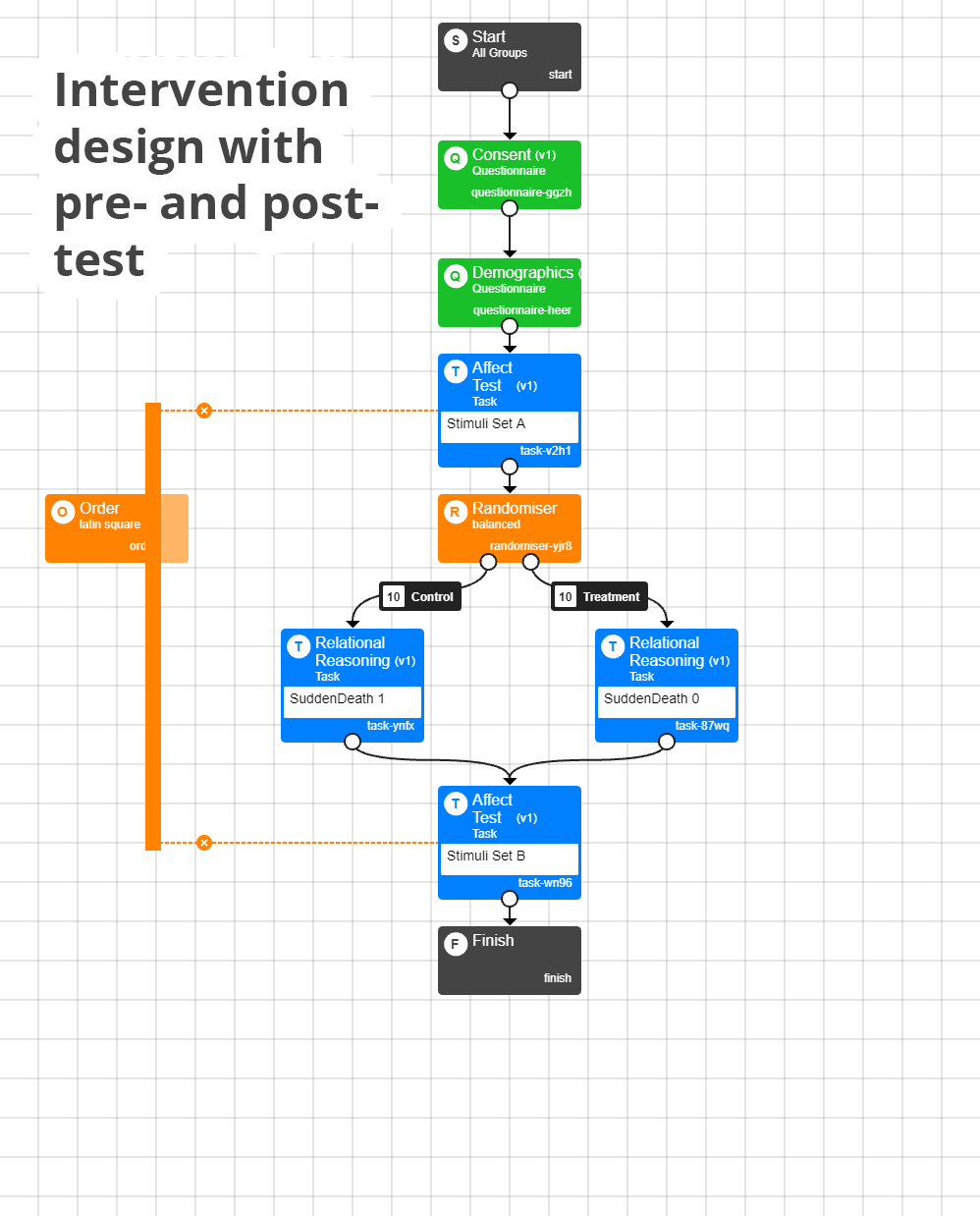 This example is the same as above, but utilizes a ‘branch’ node, which allows screening out participants before they complete an aspect of your experiment. A participant’s response to a question about smoking in the demographic questionnaire is preserved using a function called ‘embedded data’ and is used in the ‘branch’ node to ensure only smokers complete the tasks. Non-smokers are taken to a finish node, meaning they end the study there. Embedded data can be anything, from a survey response to an accuracy rate in a task – permitting complex response dependent experiment design.

The ‘Repeat’ and ‘Delay’ nodes allow the user to create a multi-day training protocol. This example demonstrates how this would be done in a minimal way. After completing the consent and demographics questionnaires, participants enter a repeat loop (the dotted line between the two ‘Repeat’ nodes). At the end of each iteration, a ‘Delay’ node is configured to send a message to the participant asking them to come back in 24 hours, and it is also configured to send a custom email at that time to the participant with a link to continue the experiment. This iterated three times, so each participant is able to complete the same task three times before finishing the experiment. Repeat nodes could be put around the intervention design above, to create a multi data Randomised Controlled Trials, all without writing code. 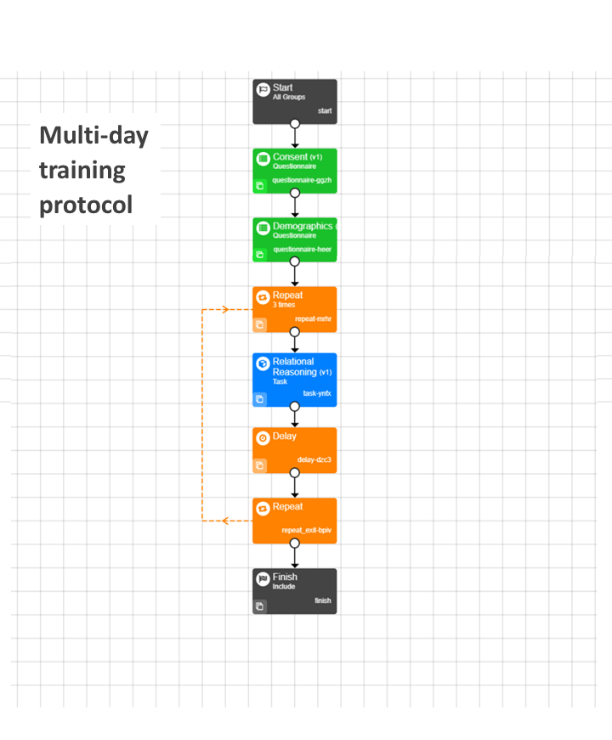 So, what’s the take away? Gorilla is a powerful experiment design tool. Rather than weeks if not months of coding an experiment, you can create one in hours or days. By saving you time, we aim to accellerate your research cycle and help you achieve your ambitions.